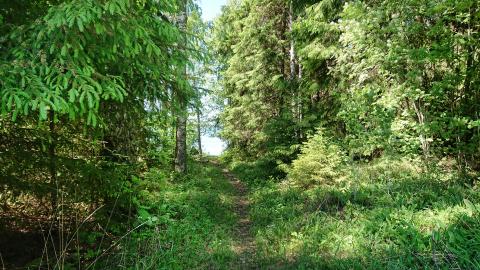 The Finnish Natural Heritage Foundation has been left a significant legacy in Lappeenranta: the Riihilahti farm, located in the Niemistenkärki region on Lake Saimaa. The foundation co-operated for almost ten years with Viljo and Kerttu Ahonen, a brother and a sister who owned the place, to have the area included in the Metso conservation programme and bought a small part of the place when the siblings grew older and moved to a nursing home. The majority of the farm was placed back then under the protection of the Finnish nature conservation act.

"We also inherit now sections not yet preserved. The sections with the most valuable landscapes on the shores and by the edges of the forest, covering several hectares, have remained unprotected, but not for long. The result will be a protected area of approximately 36 hectares", according to Anneli Jussila, the foundation’s executive director.

"There is also another conservation area of over 24 hectares as a southern neighbour belonging to a different owner. Thus, there will be over 60 hectares preserved altogether."

The need for having areas placed under protection is increased by the closeness of the border, according to Mrs Jussila.

"The Riihilahti farm will be one of the most significant places conserved by the Finnish Natural Heritage Foundation, thanks to its location, links to the surroundings, shores that have not been exposed to construction work, and forest that has remained intact for almost a hundred years as well as its unity and size."

The archaic buildings of Ahola represent the traditions of the Saimaa archipelago. The main building is from 1903. Respecting the wish of the siblings, the foundation will preserve this centre, which has remained in its original condition unusually well. Our goal is to renovate the place with traditional methods and partly by volunteers. This summer, the focus has been on the roofs of the buildings.

The Riihilahti forest is valuable and diverse. Although dominated by conifers, the forest also contains birches, aspens, and limes; the ground is exuberant especially in the depressions between the rocks. The forest is a home for the wood grouse, the Northern goshawk, and the flying squirrel as well as the beaver living on the shore; in addition, there are toads and adders living their lives in peace.

There is approximately one hectar of cultural landscape included in Ahola, made up of meadows and dry fields, all managed by volunteers who mow the hay and dry it on hay poles. One can see plenty of butterflies representing a number of various species on the meadows along with grasshoppers and many other insects. According to some entomological studies, there appears to be a variety of beetles in significant numbers in this place.

"South Karelia is a province with the smallest number of conservation areas in Finland, which means that every hectare of forest protected is of greater importance here than anywhere else", says Anneli Jussila, the executive director.