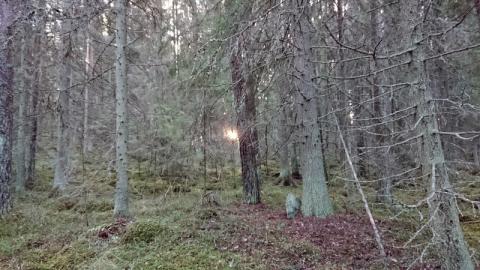 Holamppi is an area of many trees and terrain forms located in Ahlainen. Lake Holamppi has become a small habitat of deciduous trees, and a few hundred meters away, we find the conservation area of Majavapurot, which was acquired in 2017. Holamppi was purchased by the foundation in 2019.

Elina Tuomarila, who is completing her master's thesis in landscape research at the University of Turku and works on sustainable development in Helsinki, has written about Holamppi as follows. She is one of the heirs who sold the Holamppi area to the Finnish Natural Heritage Foundation.

"I remember. In April, year after year precisely during the days following the winter we spent in the old farmyard by the Pohjanjoki river in Ahlainen, two cranes flew over us and screamed with joy. Towards Holamppi. Always Holamppi. In October, there would be one or two more when they flew away. It was a long time ago, and I only visit Holamppi or Ahlainen when I go to the cemetery nowadays. But Holamppi is still there.

How do I define Holamppi, the forest and the surrounding area? Holamppi is a swampy lake of stories, sorrows and joys together with the surrounding neighborhood. Although Holamppi spans several kilometres, Holamppi extends in my memories to the fabulously clean water of the Pohjanjoki river, the sandy road that rasps under the bicycle, swimming in the dark waters of the river, on the way to sea. During the dark hours on Christmas Eve, I steal a moment for myself and lie down on the ice to see how the first snowflakes float down. The deep green edge of the forest and the water surface that is turning white are the key to the identity.

To the generations before us, the surrounding forest has offered firewood and served as a forest pasture where the cows grazed. Holamppi was a curse and a blessing. The trees did not want to grow at the edge of the wet swamp, and the European beaver did its best to keep the water surface high. But the cranes came back, the birch grove at the marsh was like a poem. The forest was made up of the older generation's unfinished and lonely work, collecting of firewood postponed by the cold, and fates filled with sorrow and joy. Midsummer night's walks along old carriageways and forest paths.

When the older generation was gone, we wanted to protect the area. As one of the heirs, I was only grateful that the Holamppi forest would continue its life in peace and quiet. One of the ELY centres received a small forest section that remained outside this area. You see, there are more important things than the memories, such as the territories of the birds and the mammals as well as the drainage basin of the Pohjanjoki river. And now, all of this belongs to the same forest's cover.

Holamppi is a monument that over the decades has developed into a site of memories. In my childhood, Holamppi taught me to observe and understand other realities except my own, nature's and man's. This monument is a living trail that allows me to take root in new forests and landscapes. My landscape and heart are elsewhere, but Holamppi remains in mind regardless of my own will.

Here elsewhere, I meet the crested tit eye to eye for the first time, and when I pause for a moment in the forest, an insect flies by with its thin wings that let through the rays of the evening sun. I follow its determined flight as it meanders through the trees and disappears into the forest. Who am I to say that it does not know where it is heading to?"